We had a training at Lake Berryessa from June 9-11. The training was supposed to simulate some of the race day conditions. We started Saturday with a 2 mile swim. This was followed by a 100 mile bike ride through some really hilly roads and some pretty dry heat (mid-80s). On Sunday we would have a 13.1 mile run.

My swim went very well. I finished the 2 miles in about 57 minutes, which is good for me. 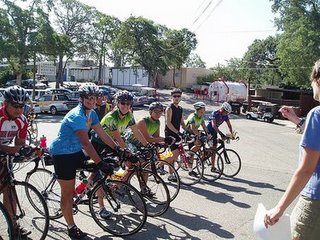 The bike also started well. I just got some new "faster" wheels, and I was anxious to try them out. I felt light, fast, and speedy. I would say for the first 30 miles, I was averaging about 15-17 mph including the hills.

BTW, the hills weren't the only thing hard about the course... there were also stream crossings.

Anyhow, after about 30 miles, I felt like somebody had just pulled the plug on me. I couldn't seem to go any faster than 8 mph. Pretty soon all of the people that I had passed were passing me. I thought I was psyching myself out, but I could not will my body to go faster.

At about mile 40, there was a Shell station, so I decided to go to the bathroom. I had been hydrating as planned (or so I thought), but oddly enough, I really did not have to pee. Usually by this point, if I was well hydrated, I should have to. Urine color should be clear to mildly yellow. Mine was nuclear yellow. 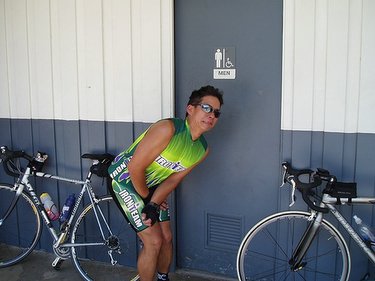 I got back on the bike and headed for the next water stop at mile 45. The awesome TNT volunteers asked how I was doing, to which I replied that I had been better. I was "Bonking" big time. They iced me down, and gave me fluids. A few coaches came up to me and noted that my skin was completely dry. Coach Alex told me, "I've seen you look much better than this."

Coach Tom suggested that I call it a day. I was fine with that.

I did not do the run the next day either.

So what happened. Well, I can track it all the way back to Wednesday. On our way home back from San Diego (see Rock 'n' Roll report) we stopped to get something to eat. I had some French onion soup. Ever since then, food was going through me... perhaps a bit of food poisoning? My inability to keep food down also inhibited my fluid uptake.

It took me until Monday to finally feel like I was rehydrated.

This is definitely not the scenario I want at IronMan.

I'm a little paranoid about food now. If I'm not cooking my own food, then I definitely want to see the food prepared.

Wish me luck. And if you haven't already, please donate... www.IronMel.com