My Shoulder and the Significance of "32" 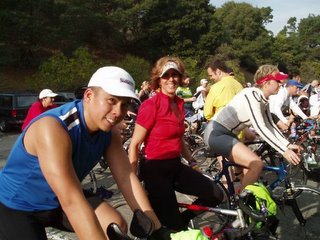 This is a picture of us "Spinning" (that is biking in place) at Paradise Park.

I went swimming the next day after this picture was taken. I swam almost 2 miles. Didn't really think much of it until I started to feel a pain just to the right of my left shoulder blade. It didn't stop me from moving, but it did make me cringe everytime I put on my jacket.

I got a massage tonight, and the massage therapist was able to find the muscle knot right away. It was the area on my back that was the most tense. My shoulder is still sore, but it feels much much better!

Our Honorees... the real heros 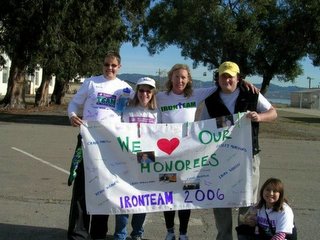 These are the honorees of the 2006 IronTeam. They are comprised of survivors as well as patients of Leukemia, Lymphoma, and other blood cancers.

The taller lady (just above the heart in the sign) is actually going to do the IronMan. The little girl at the bottom is only 10-years old... she is still undergoing Leukemia treatment.

Yet another Practice Tri 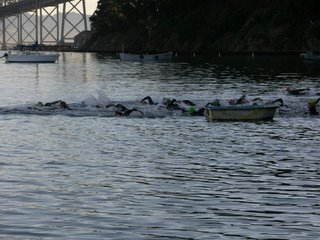 We did another practice tri this weekend... this time it was at Paradise Cove in Tiburon. It concerned me that we were swimming in a place called, "Tiburon" (which is Spanish for "Shark").

We swam about 1000 yards in the bay (about 55 degrees). Then we spun on our bikes (attached to trainers) for about 45 minutes. Then we followed it up with a 30 minute run.

The above picture is actually from the practice triathlon the previous week at Treasure Island... but you get the idea.

I'm feeling much better about the swim. Yeah, it's cold. And yeah, my face gets numb... but the comfort level in terms of ability is way up from last year. I also think I'm getting faster! 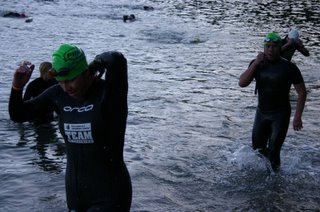 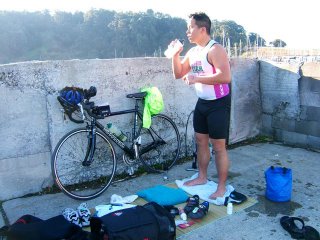 The water was cold! My face was numb! I couldn't wait to get out of the water. I think they said it was about 55 deg. F.

The rest of the day was pleasant. I was able to finish in just under 2 hours.

See folks! This is what I go through! Please be sure to donate. www.IronMel.com 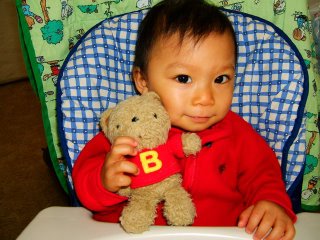 This is my son, Jesse, at age 1. He looks like a future ironman (or hockey player). Just don't take his bear!

I had a cool little workout yesterday. Here's the low down... down low.

We had ordered a bunch of picture greeting cards online at CostCo. Vickee asked me where I wanted to pick them up, so I told her at the South San Francisco CostCo.

The South San Francisco CostCo is on El Camino across the street from the BART station. I thought I could run from work to CostCo and get in a good workout. It's only 4.5 miles away.

So it's raining. I'm going over a few really good steep hills. I'm looking strong. I see CostCo in the distance. I'm a stud!

Run into CostCo. Give them my name.

No I didn't know that there are two CostCos in the South San Francisco.

So my order was at the CostCo on So. Airport Blvd. Which happened to be 2 miles closer to me than the CostCo that I ran to.