This past Sunday (6/25/06) was the last big training before IronMan. It was the Triple BRICK. Just to refresh your memory, a "BRICK" is a bike ride followed by a run. As the name implies, we were going to do a BRICK three times.

Each BRICK consisted of a 30 mile bike ride followed by a 50 minute run. The idea behind this training was to give us a long steady effort in less-than-ideal coniditions... which is why Danville was the venue of choice. Luckily for us, it was cooler than forecasted. It was only 98°F instead of the 105°F that I had been dreading all week. It was practically snowing.

If you read my Berryessa report, then you know that I was dehydrated... severely. This weighed heavily in my mind as I prepared for this weekend. Being the last big training before IronMan, this would be my last big test. I wanted to do well.

I started to prepare on Wednesday. I tried to take in more water and salt than normal. This meant putting more salt on my food, and drinking 1-2 quarts of Gatorade. I also eliminated caffeine from my diet, except for what trace amounts are found in my daily chocolate fix.

By Thursday, I had elminated dairy from my diet. Not that I don't like dairy, it's just that it sometimes makes me feel like it slows down my digestion. I needed a fast metabolism for the race.

Friday would be the most important day in terms of nutrition. It typically takes 24 hours for food to completely digest. That means that the food that I was eating on Friday night would be the calories that I would be burning on Sunday. I loaded up on pasta, bread, and rice. I accompanied that with some protein... mainly beans and some meat. I topped off the night with a smoothie that had yogurt (to aid in digestion).

Saturday was all about keeping the calories and water that I had been storing topped off. Breakfast and lunch consisted of 2 meal replacement shakes which gave me a combined total of 1020 calories. I would snack on pretzels if I got hungry. Dinner was half a plate of brown rice, polenta, tomato, and some lean turkey. I finished this meal by 5pm. I topped this off with a smoothie (no yogurt) at 7pm. I was in bed by 9pm.

I weighed myself before I went to bed. On Wednesday I was 156 lb. I was now 163 lb. I attributed most of the weight gain to water, which is exactly what I wanted.

I woke up at 4am on Sunday and ate 4 waffles and 2 tablespoons of maples syrup, which was about 600 calories. I started to take in some water and Gatorade. A quick pee-color check showed that my urine was fairly clear. Good. I set my alarm again for 5:30am and went back to sleep.

By 6:30am I was on the road. I was sipping Gatorade to keep my fluid levels topped off.

My plan for this training was to start slow. I wanted to take the first two BRICKs easy, and then give it all I got on the third BRICK. This was unlike what I had been doing all season. For most of the season, I would start out as fast as I could go, and then see what happens... or like Coach Alex said, "Go till you blow."

We started at 8am. The first bike was easy. We were all paced at about 15 mph. We were instructed to not pass Coach Wayne. I tried to go slower. The "going slower" part wasn't hard since my bladder was full... it was hard to pedal. It felt like I had a 2-ton weight on my bladder. Luckily, Susan, Peter, and myself found a gas station. My pee was clear... hydration wasn't going to be a problem. The first bike was finished in about 2 hours.

The first run was also easy (it would get more difficult as the day wore on and the temperature would increase). I figured I was running at about 8 minutes/mile. This was too fast for my strategy, so I walked a few times for about 2 minutes each.

On the second bike, we were instructed to not pass Coach Wayne until half way through. I was still trying to go slow. I was the first one to reach Wayne, followed by the "Fast Bike Guys" on the team. I passed Wayne and still tried to remain slow. That thought of going slow quickly left my head as Cesar passed me like I was standing still. Instinctively, I gave chase.

I have to admit, it was fun chasing him. Damn he's fast. I kept up with him for several miles until good sense once again entered my brain, and I slowed down. "This is not part of the race," I would tell myself. "This is the warm up." "The race is the last BRICK." So I slowed down. I was averaging about 16 mph for the two bike portions combined.

The second run was hard. It was now close to 2pm. There was very little wind. I changed to run/walk stategy and ran 4 minutes followed by a 2 minute walk.

Maybe it was my transitions, but by the time the third bike loop started, I was all alone. I figured this would be a good test... there was nobody to pace me... just me.

I got to the water stop and they informed me that I was the first one there. I kept looking back, expecting that somebody was going to catch me eventually.

BTW, the people at the water stop rocked! They had ice-cold towels! That was definitely a boost.

By this time, the Gatorade was tasting gross. Too much sweet for me. On top of that, my calf started to cramp. I gave up on the Gatorade and opted for Endurolytes and water. The cramps went away.

I kept looking back, but I never did see anybody. The next time I saw somebody was on the way back out of the loop when I saw Mo who shouted, "Holy Sh*t, you're on fire!" It felt good!

I made it back to the transition for the last run. This was it. It was all or nothing. I ran 10 minutes, and walked 5 minutes, ran 15, walked 2, ran the rest of the way in. I finished 8 hours 34 minutes... and for the first time, I finished first.

My total run time was 2 hours 30 minutes for about 12-13 miles. My total time in the saddle was 5 hours 32 minutes for 89 miles (16 mph average). That leaves 32 minutes for transitions (about 10 minutes each). I consumed 1400 calories on the bike and run. After a post-race turkey sandwich and a half-gallon of water, I weighed 155 lb.

It was good day. Now I have to turn my attention to Lake Placid. July 23, 2006. Hopefully, I can build upon the things I learned today. 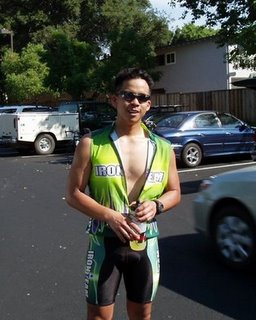 This is a picture that Raf took just after I finished the Triple BRICK. Sorry about the open shirt... it was flippin' hot!

Dude...you did rock. You are so strong, it is amazing - I thought you were Coach Wayne riding towards us! Congrats on an awesome day. Mo

about the Ironman USA, so lucky with the weather on race day. So how did it go, please update your web site with race details. CONGRATULATIONS MAN, YOU ARE AN IRONMAN !!! so how did the swim, bike and run go. hard course isn't it!