The only consistency in my training since IronMan USA is the lack of training consistency. In the 5-6 weeks since IronMan, I have trained a total of 5 times. The first 3 weeks was recovery. The 5 training runs consisted of 2 runs of 10 miles each, 2 bike rides of 40 miles each, and a 1 mile swim. I was a bit nervous about my preparation for this race. Nervous? Yes. Excited? OH YES!

The Big Kahuna is a shorter distance triathlon than the IronMan; only consisting of a 1.2 mile swim, a 56 mile bike, and a 13.1 mile run. This was my first ocean water triathlon.

Nutrition on the course was Hammer H.E.E.D. (High Energy Electrolyte Drink) and Hammer Gel. I have used these before, so there was no need for me to bring a whole lot on my bike to weigh me down.

The start of the event took place down by the pier on the beach. Some words were said, a Hawaiian blessing was given (complete with a conch shell blowing), and we started to swim. The swim occurred in waves with the elite athletes starting at 7:00 am and my wave starting 6 minutes after them.

The water was a balmy 59°F. I crossed the timing mat and I was in the water. All that time training in open water for the IronMan had come back to me in a flash. Pretty soon I had a rhythm. The water was choppy, and I found that if I brought my head too far out of the water to sight, a wave would slap me in the head. It taught me to keep my head down (which ultimately helped me).

Once I rounded the pier, I started to head back for land. The water was salty (duh), and it reminded me about an e-mail joke regarding the GALLONS of semen a whale can release. The punch line was “And that’s why the ocean is so salty.” Damn, I just swallowed some ocean water.

All kidding aside, my tongue was starting to swell up.

The current was working against me (it seemed to be pushing me away from the pier). So I would zig-zag my all the way back to the swim exit. After about 44 minutes, I finally made it back to the beach. There were throngs of TNT people out there cheering on their teams. I was a team of one today. I ripped off my wetsuit and rash guard and I heard somebody say as they saw the flames, “Go Team... I mean Go IRONTEAM!”

From the beach, it was a little over a quarter-mile run (barefoot on asphalt) back to the first transition (T1). I had planned on wearing my tri-suit under my wetsuit, so my transition was fast. All I had to do was put on my shoes, grab my endurolytes and helmet, and I was off. It took me a total of 12 minutes for T1; which included the run from the beach.

I felt really good on the bike. Instead of holding back like I did in IronMan, I started to charge early. I was averaging 20 mph for the first part. If my nutrition plan had worked out, charging early would not have been a problem… but it didn’t work out, and this became a problem.

Around mile 7 or 8, I heard something while I was biking. It sounded as if something dropped on the ground. A quick check of my bike showed nothing had fallen off (water bottles, brakes, wheels were all intact). I didn’t think much about it more after that. It turned out to be my canister or Endurolytes.

Endurolytes are salt tablets that I take when I start to cramp. As if on cue, Murphy’s Laws went into full effect, as was evident by leg cramps around mile 10. No worries… I just had to back down on my effort and wait until I could get some HEED at the next aid station.

The first aid station was about mile 15. It was staffed by the South Bay IronTeam! Cool! They had some nicer water bottles than what was on my bike, so I ditched my old worn out water bottles and replenished with HEED and water bottles. Bummer…they had no gels.

When I finally took my first drink from my HEED bottle, I was filled with a sense of dread. It was too dilute. I have had HEED before, and I know what it’s supposed to taste like. This was more than half diluted. This meant that the entire bottle couldn’t be more than 100 calories. With only this bottle and no gels, I was carrying only 100 calories. On top of that, the weaker dilution meant that I was also going to be electrolyte deficient (the osmolality of the HEED would not be optimal for absorption). The next water stop was about 1 hour away.

It shouldn’t be that bad. I’ve raced on fumes before. So I continued to crank hard. I noticed that my speed was dropping.

The second aid station had some gels, but I was only able to grab one as I rolled through. I traded my bottle of HEED for another bottle of HEED. This next bottle was even more dilute than the first! With about 1.5 hours of the bike portion done, I had taken in about 150 calories… about 300 less than where I should be.

By mile 40, I was starting to feel sleepy. I mean REALLY sleepy…groggy. Have you ever been tired while driving, but you had to keep going? So you do everything you can think of to stay awake? That’s the kind of sleepy I’m talking about.

I hit the last aid station fairly out of it mentally. I traded in my HEED bottle for another dilute bottle of HEED. My speed had dropped to 10-15 mph. I stopped pedaling on the downhill portions to conserve my energy. T2 couldn’t have come any sooner.

By the end of the bike, I had consumed about ~200 calories… about 800 calories less than what I needed.

At T2, I consumed some gels that I had stashed at my transition area. I also took in some endurolytes. I tried to make my transition fast. One quick stop at the porta potty, a quick wave to my wife, Vickee and my son, Jesse, and I was out of T2 in 6 minutes.

On the run, my legs felt surprisingly fresh, but my mind was as dull as a baseball bat. I took my first walk break after 10 minutes. When I started to walk, my eyes would close, and I would start to stagger around like I was drunk. I wanted to go to sleep. I was afraid that a race official would see this and pull me off the course. It was really scary.

The good thing was that the aid stations were more frequent on the run course than on the bike course, and were well stocked. I took in an espresso gel (actually has real coffee in it) and water at the first aid station. I haven’t had coffee since November, and to be honest, this tasted nasty… it was all about the caffeine. I grabbed a chocolate gel for later.

After 6 miles, I still wasn’t feeling great, but I was doing better. What I needed was to wake up! So I did something in a fit of desperation… I ate a gel without water! Now for those of you that are familiar with gels, they should always be taken with water (not electrolyte drink). The water aids in the absorption. Lack of water will divert water from your blood stream and cause cramping. This is the effect I wanted. I figured if I was in enough discomfort that I would wake up.

The result, my stomach started to cramp.

I was uncomfortable, but I was awake now. The discomfort didn’t last too long because water was just another aid station away.

By mile 7, the sun came out and started to warm everything up. I felt like Superman (check your superhero references: Red Sun= bad for Superman, Yellow Sun = good for Superman). The warmth of the sun gave me a renewed sense of energy.

The last 6.1 miles were relatively fast. I walked the aid stations, but I ran the rest of the way. I estimate that my pace on the last half of the run was ~ 9 minutes per mile (a fairly conservative estimate).

The final stretch was run on the beach. I was feeling strong as I dodged the waves rolling onto the beach. I saw Jesse and Vickee waiting there at the finish. Vickee tried to give Jesse to me, but I was still wary of my mental state and had an image of me passing out at the finish with Jess in my arms. I told her to hold him.

Here are the final stats of the race.

At the end of the race, I felt pretty good, but I needed calories badly. Jesse started to cry from the time that I passed him until the time I came back around to pick him up. He probably thought, “Dang, Dad, why’d you dis me?” Son, I just didn’t want you to fall. We did manage to get this really cool post-race picture on the beach together. 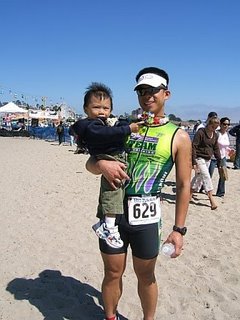 The biggest lesson that I learned is to always underestimate the race support. Be prepared for anything. If I had just brought 2-4 gel packets with me, I would have had a better day. It was a pretty good day despite the nutrition problems. I think I’m going to have to do this race again.