We arrived in San Antonio Lake on Friday and were greeted with lots of rain and wind. It looked like an ominous sign for the following day's race. I on the other hand was optimistic that conditions were going to be rain-free (that and the weather forecast said no rain).

Saturday (race day) didn't start out as expected... actually quite unexpected. There was a thick layer of fog everywhere. With the limited visibility, we could not do the swim as planned. There simply were not enough water craft to monitor all the people in the water. The swim was shortened and we did laps for 30 minutes. I estimate that we did 1200-1600 yards total. I am assuming that I would have finished the swim portion in about 45 minutes but will call it 1 hour. 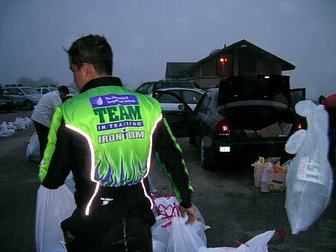 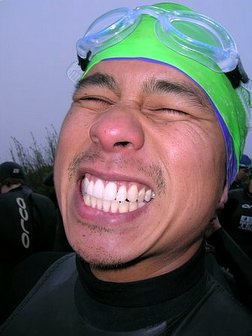 After a quick transition to the bike, we were off to tackle the fog once again and the "Nasty Grade." The first 30 minutes of the bike was fast, but it was hindered by the accumulation of condensate on my glasses. I would wipe it away every minute or so with my gloves. Slowly, the fog did burn off and we had sunlight!

The bike course consists of rolling hills and Nasty Grade. Nasty Grade is a 3 mile climb that rises 1000 ft. What's worse is that it comes at around mile 45. This is the part of the course where the most speed is lost. However, after having done the courses around the Bay Area, Nasty Grade didn't seem that nasty.

Now I had done this course before, but I felt much lighter, faster, and nimble on the bike. My average speed on the bike course was 16.23 mph with a finishing time of 3:45. The last time I did the course I finished in about 5 hours.

The run, which up until now had been my strongest event, was the most difficult. Due to nutrition problems on the bike, I was having pretty bad stomach cramps for the whole 13.1 miles. Add a really hilly trail run, and that equals a mediocre run day. I walked a bit, and ran where I could. If I pushed the run, I felt like I was on the edge of vomitting. I finished the run in 3 hours.

With the 1 hour assumed for the swim, I finished the course in 7:45. The last time I did the course, I finished in 10:15. That's a 2:30 improvement. To say that I am happy with the outcome would be a severe understatement. Just think about what might have happened if my nutrition wasn't out of whack.
Posted by R.Q.S. at 7:14 AM

Wow!!!! Talk about awesome improvement over last Wild Flower. I've been to that race a few times (supporting) and it's by far my favorite (closely follwed by Ironman Canada). Kind of has that 'Woodstock' vibe. Congrads on the weight loss as well. It's tough.. Keep it up....Ironman training stops for no one!
Congrads again! great race!!!!